If you cycled the total length of Bordeaux’s cycleways, you’d have achieved the equivalent of the Suez Canal, and the range of a Scud-A missile. At 143km long, the bike paths of the French metropolitan city have helped influence its ascension in the top-tier European cycling cities ranks.

To promote this even further an event, launched by the mayor, Alain Juppe, is being held until January 20th 2012. In collaboration with the event is top French product designer, Philippe Starck. He and thousands of Bordelais will come together and share views, opinions and design ideas for what’s been coined the ‘Bordeaux Bicycle’. Its purpose is to intertwine with the needs of the city’s public – the need for a compact, easy to carry and ride, lightweight mode of transportation which looks as elegant as Bordeaux itself – and will be available for all to take in the iconic and artistic sights of the city.

Speaking of which, there’s a route in the centre of Bordeaux which is five miles long, and takes in some of the most famous and interesting Bordeaux attractions. It can easily be cycled using one of the bikes provided by the city. Finding a bike won’t be difficult, either; there are 139 cycle stations around Bordeaux, and can be found on most squares, at bus stops, and tram stops. From these stations you can pick up and drop off a bike at the charge of €1 for the day. What impresses further is that you can abandon a bike while you pop into a restaurant for lunch, and grab a different one when you’re finished – the freedom and convenience of this seriously reduces the stress and cost of traffic issues. 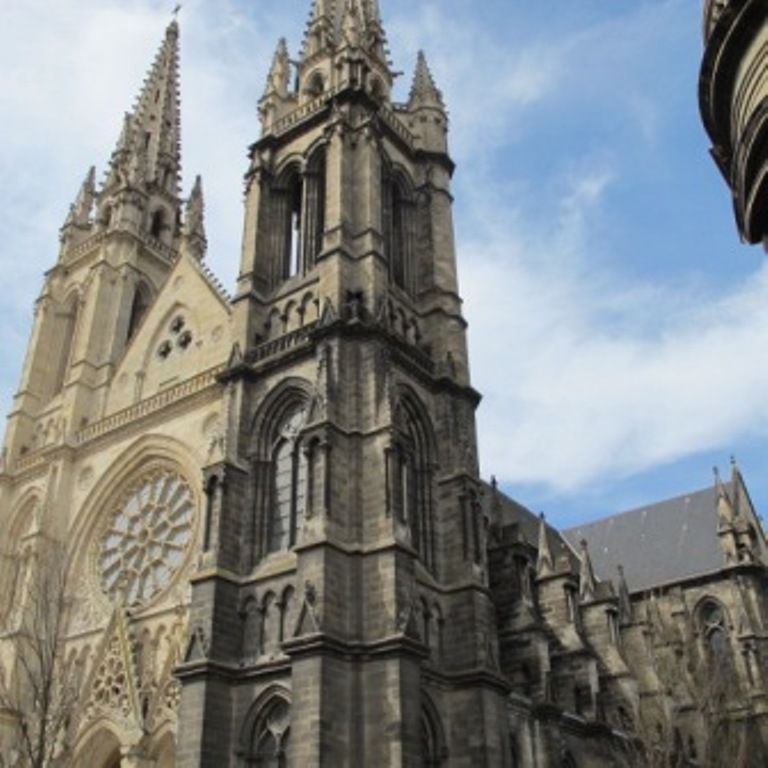 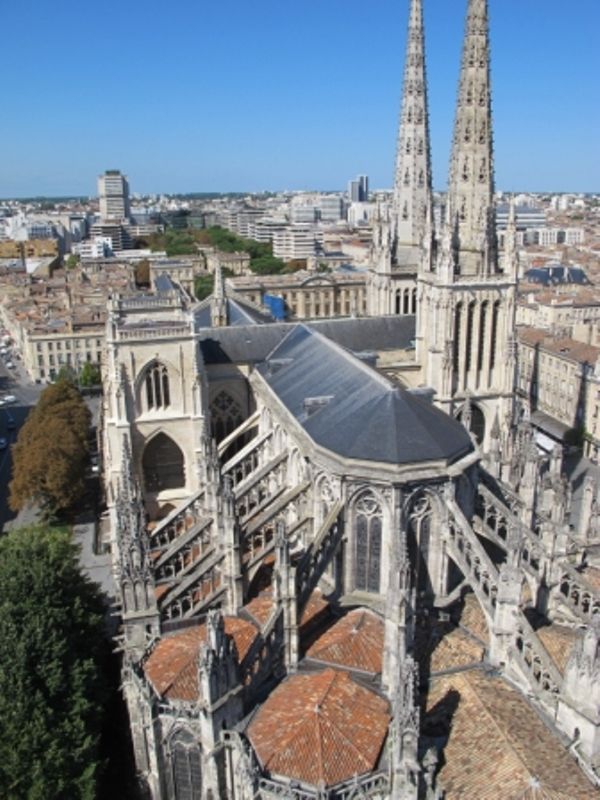 Saint-Michel to the Aquitaine Museum

The trip begins at the magnificent Basilica of Saint-Michel, right on the edge of the river Garonne and close to the Pont de Pierre. There’s a meeting point at Saint-Michel, making it an easily recognisable and accessible point for cyclists. Find the nearby Cours Victor Hugo and follow it west towards the Aquitaine Museum. On the way, keep your eyes on the right for an artistic installation of a green car whose front end tentatively protrudes from a multi-story car park. Once you reach the Aquitaine Museum, feel free to wander round its interior, revelling in its historical, archaeological and ethnological discoveries. With its 19th century archways and pillars, this museum helps make up the epitome of Bordeaux as a UNESCO city.

Upon exiting the museum, take a right down Rue Duffour Dubergier and you’ll see the Cathedral of Bordeaux, Saint André on your left. It stands like a towering rock amongst pebbles in a city festooned with buildings whose roofs are light tan, and whose façades display rows of quality food and drink – the restaurants in Bordeaux will make you want to hop off your bike and glide through the doorways as if in a trance. But it’s on to the ‘Market of Great Men’ for now. Follow Rue Pére Louis de Jabrun onto Rue de Gross, through the narrow streets tailor-made for cyclists who want to beat traffic. Cross over Cours de l’Intendance and keep going straight until you emerge at the bulging amphitheatre of a market. It’s one of the city’s many traditional markets, and open from 10am – 8pm Monday to Saturday.

Head east now, towards the River Garonne. Once you reach it, turn left and cycle parallel to it along its banks. There are cycle paths all the way along here, making it even more convenient and pleasurable for users. This will be the longest leg of the trip, but Cap Sciences, the mind-boggling Bordeaux science museum, is a worthy reward. There are dozens of events, workshops and displays at the museum, and with opening hours from 2pm – 6pm (and until 7pm on weekends) it makes for a perfect post-lunch activity. En route to the museum, however, note that this stretch of the ride is a great vantage point for taking in the sweeping scenes of river and city. Look back and count the arches under the Pont de Pierre, for example, before heading onwards. 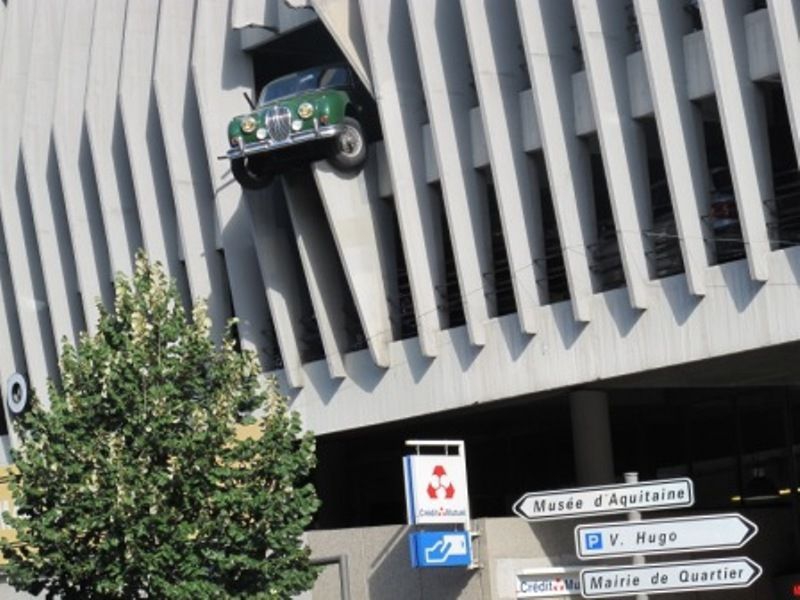 Cap Sciences to the Water Mirror

From here, it’s a return journey back the way you came to one of the more unique Bordeaux attractions and a real must-see: the Water Mirror. Outside the doors of the 18th century La Place de la Bourse there’s a glitch in the weather forecast. Fog descends around a particular square along the riverbanks, but this ‘fog’ is actually dense water vapour, created by the computerised system underneath the Water Mirror. Feel free to leave your bike behind for a moment and stroll, or sprint, through the hazy cold mist – it’s certainly a sure fire way of cooling yourself off after a hot day’s bike touring. At night, the reflection of the spectacular building is reflected in the half-inch surface water in shimmering brilliance. It’s any photographer’s money-winning snapshot.

The Water Mirror to...that’s up to you

Of course, the time of day will determine what you do next. You can either float on back to the Saint-Michel meeting point, or take a tangent – other available options will always make things easier when deciding what to do. For example, from the Water Mirror take a left across the Pont de Pierre, the first bridge ever constructed in the city, and follow the tree-lined Avenue Thiers for a couple of miles to Cenon; you’ll find yourself in somewhere completely different to what you left behind. It’s as if someone took a ruler and divided the city in half, with architecture, streets and alleyways on one side, and blossoming green bushes with rolling grassland on the other. Although the city centre strives to be environmentally green, Cenon and beyond is, literally, the greenest part of Bordeaux, and is ideal for a spot of rural cycling.

With the number of cyclists in Bordeaux having tripled over fifteen years, and 7-9% of its residents commuting by bike every day, there’s never been a better time to two-wheel yourself around a city as intricate and artistic as this one. 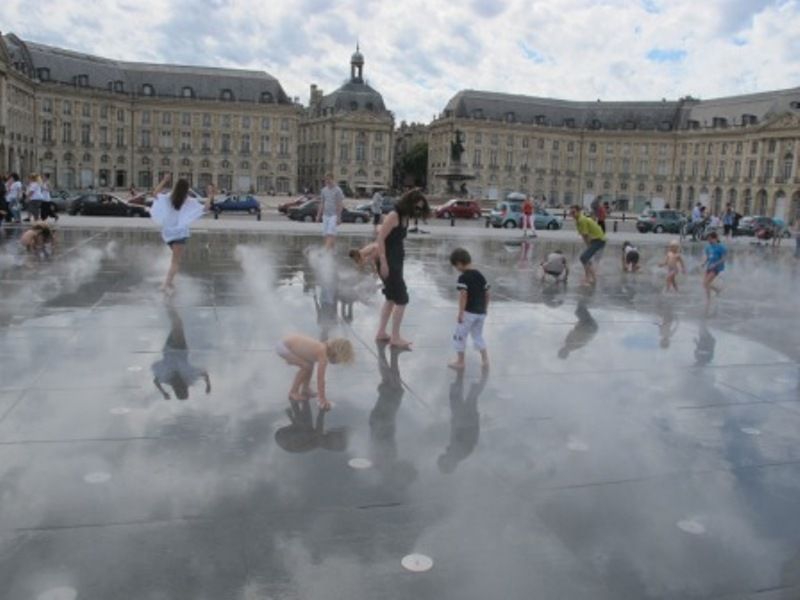