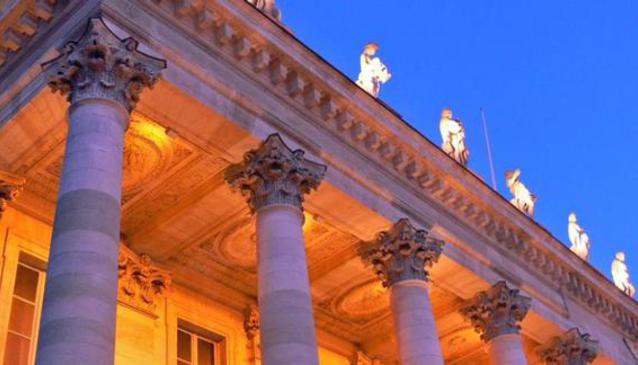 Grand-Théâtre continues to be one of the finest venues for live entertainment, classical and modern- ballet, opera, dance and theatre presentations.

Victor Louis, who also designed the Theatre Français in Paris, was the architect of this grand edifice to music, dance and theatre. With great pomp it was finally inaugurated in 1780 after many years of hassle but well worth the wait. This neo-classical architecture was the model for Parisian and European theatres from the end of the 18th century to the beginning of the 20th. It is no wonder that the magnificent main staircase was later copied by Garnier for the Paris Opera.

The spectacular neo-classical façade of the theatre with a portico of 12 enormous Corinthian style columns was nicknamed 'Louis' twelve columns'.

When it first opened in 1780 the Grand Theatre was indeed modern with spacious entrance halls, foyers, multi-purpose rooms used as concert halls, meeting rooms, a café and even a shop. The theatre has served many purposes. The concert hall became a ballroom in the 19th century and from 1871 to 1914 it was the National Assembly of the French parliament.

The ceiling above the stage, spiraling arches converging to the centre was repainted in 1917 by the Bordelais artist, Roganeau, and based on the original trompe l'oeil painting of Robin. With white windswept clouds in a vivid blue sky, this painting shows the town of Bordeaux offering the theatre to Apollo and the muses. The interior restoration in 1991 finally returned this building to its grandeur and original blue and gold colours.

The acoustics in the auditorium are extraordinary. It is a delight to experience The Grand Theatre performances, home to the Opéra National de Bordeaux and the Orchestre National Bordeaux Aquitaine. If you're fortunate enough, you may have the opportunity to enjoy the outstanding national and international ballets, or any number of pop, modern and classical concerts celebrated in one of the best houses of the arts in France, The Grande Theatre-Opera de Bordeaux.

We recommend the Opera Cafe within the building. With grand chandeliers, this is a perfect setting to enjoy the stunning architecture of the Grande Theatre. One of very few restaurants in Bordeaux, The Opera Cafe is open all day and late into the evening to compliment the performance schedules.