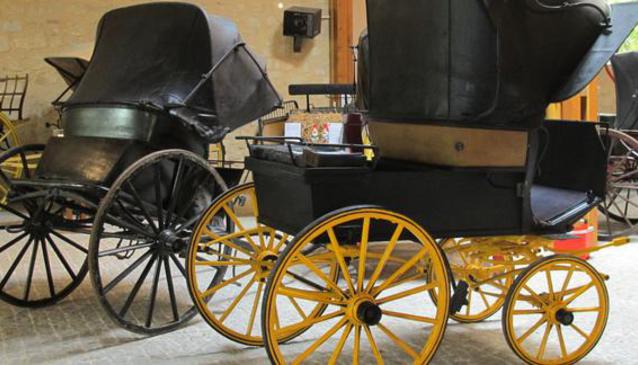 The Citadelle Chateaux and Museum - Bourg

In the medieval town of Bourg, perched high on the right bank overlooking the Dordogne River and along the hilly wine route of Blaye, is the Citadelle Chateaux - Chateaux de la Citadelle. Where the Dordogne breaks off from the Gironde, the Citadelle has served as a strategic military site throughout the ages and was even used by the Germans during the 2nd World War to monitor river traffic. The Museum now houses a beautifully cared for and significant collection of early horse carriages.You’ll have an eagles view of the river and the Medoc on the opposite side from the fortress lookout.

The tour of the Chateau Citadelle will take you through 3 areas, the horse carriage collection, the underground passage built during the 16th Century and the remaining rooms of the original buildings below the guard room. The collection of carriages came from the private collection of M. Rabotin (owner of a tranport company) and are all from the Aquitaine region. From elegant city carriages to practical country carriages used for hunting when it was more expensive to keep a horse than a servant, these vehicles relate the colourful life of the Aquitaine.

The underground passage of the Citadelle was also used by the town’s people to access the docks for supplies in the early days. You’ll have an eagle's view of the river and the Medoc on the opposite side from the fortress lookout.

The remaining rooms housed the military and the Germans installed electricity during their occupation of this medieval fort. They also blew up the Glisia, the wrecked ship in front of the Citadelle which remains as a constant reminder of this bleak period during the 2nd World War.

Hours of the Citadelle

call ahead for hours