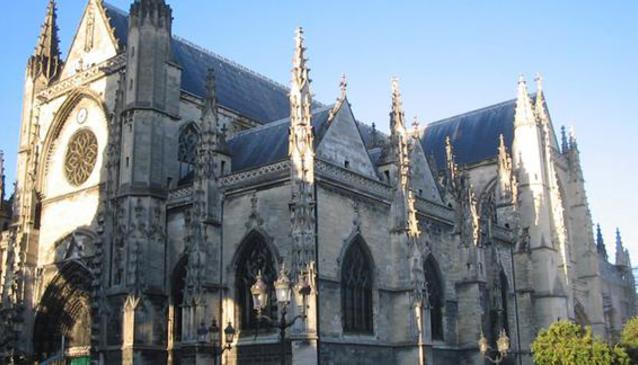 The Basilique Saint-Michel is twice blessed. It is a UNESCO site on the Santiago de Compostella Route as well as part of the UNESCO World Heritage site of the City of Bordeaux.

On the skyline of the City of Bordeaux the imposing free standing bell tower of the Basilique Saint-Michel has been a beacon not only to the pilgrims from all over Eruope and the UK but to craftsmen, tradesmen, seamen and bargemen who came and went over the 200 years helping to build the Basilica. The bell tower was under construction from 1472-92 and is the tallest in Southern France. Dedicated to Saint Michael, patron saint of the kings of France, this certainly helped to secure extra financial gifts and support from Louis XI.

There are three naves with 14 side chapels separated by beautiful grill work. In 1940 aerial bombing destroyed almost all the 16th century stained glass windows and the only complete one that survived is in the De Mons Chapel (St. Parenté, the three Marys, surmounted by the tree of Jesse or the genealogy of Jesus). The new windows date from 1950. One of the most remarkable statues is that of Saint-Ursula with her flock of penitents.

The colouful Saturday morning market spreading out around the huge bell tower is a feast for the senses, brimming with fresh produce, olives, dried fruits and live chickens!