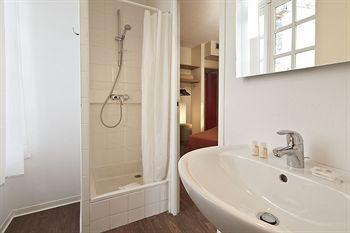 Book the Coeur de City Hotel Bordeaux Clemenceau if you're looking to be centrally located in the historic centre of Bordeaux, wine capital of the world and a famous UNESCO world heritage city, reputed for its art and history. This affordable Bordeaux city centre hotel, is wonderfully situated just a short walk from the Gambetta Square (Place Gambetta), in the area nicknamed Little Paris, where guests will find a great variety of shops, restaurants, museums and architectural treasures. Coeur de City Hotel Bordeaux Clemenceau is a traditional hotel in an 18th century house that has been equipped with a lift. The hotel provides 45 recently renovated rooms, free Wi-Fi internet access and is a perfect destination for business or pleasure. A continental breakfast is included in the room rates. Pets are allowed in the hotel free of charge. In the heart of the Bordeaux city centre, Coeur de City Hotel Bordeaux Clemenceau is in the midst of the great shops and restaurants around Gambetta Square. Within walking distance are many historic sights, such as Saint-Andre Cathedral, consecrated by Pope Urban II in 1096; the Girondins Memorial in Quinconces Square, a tribute to the Girondin deputies who were guillotined by Robespierre; the Place de la Bourse, designed by a royal architect in the 1730s as a backdrop for a statue of Louis XV; and the Roman Victory Arch at the Place de la Victoire (Victory Square). Sainte-Catherine Street (rue Sainte-Catherine) is a 1.2 km/0.7 mile long pedestrian-only street that is one of the longest shopping streets in Europe. Coeur de City Hotel Bordeaux Clemenceau is 2.6 km/1.6 miles from the main Bordeaux train station, called Gare de Bordeaux-Saint-Jean or Bordeaux-Midi, and 9.8 km/6.1 miles from Bordeaux-Merignac Airport.

All of our providers offer 24/7 support